Topic: Blockchain and Games: The 8 Best Games That Build On This Relationship 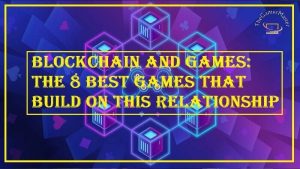 Blockchain and Games: The 8 Best Games That Build On This Relationship

Other best Gaming Guide from TheGamerMaster

Blockchain and Games: The 8 Best Games That Build On This Relationship The world is slowly undergoing a shift from physical to digital, and currencies like bitcoin are becoming a necessity. With bitcoin, it is easier to carry out digital transactions and earn profits safely: the data blocks attributed to a market player who obtains BTC by any means are attributed to them forever, until the moment they decide to sell their digital currency.

There are two ways to earn this coin: One way is by building a dedicated mining rig, the purpose of which is to search for web resources to create a single BTC. While this is usually how BTC users earn their money, it is expensive because the platform needs to run 24/7 in some cases, and building the platform itself is already expensive.
Another way, one that is quickly becoming popular, is by playing for BTC. These are sites designed like Games.LOL, that offers BTC for games or simple actions. It is another easy way to earn bitcoins, and it is also cheaper as all anyone really needs is a crypto signal platform that can run the app or program where the actions can be completed.

Take a look at these platforms that offer BTC for simple stocks or games, and see if any of them capture your crypto-fueled fantasy:

Many MMORPG games have appeared in recent years, thanks to the continued popularity of games like WoW and The Elder Scrolls Online. Huntercoin is a marriage between crypto mining and MMORPGs. In the case of the game related to cryptocurrencies, it is called MMOCG (Massively Multiplayer Online Cryptocurrency Game).
The main goal in this top-down 2D game is to collect coins and kill everyone else who might try to steal those coins from you. Players who earn coins can store them in a bank. Most, if not all, actions in the game require a small amount of crypto to perform. Killing a player causes them to release their coins on the map, free for you or any other player to take.

The storm is another platform where users can get BTC, Ethereum, or the app’s native cryptocurrency, StormX, to buy or sell other coins. Bitcoin and Ether are the best known of the three, but Storm is already in the top 400 of the cryptocurrencies that are currently available.

The tasks available on the platform range from playing a game, taking a survey, watching a video, or downloading and testing an app. More completed tasks mean more “Bolts”, a kind of in-app currency that can be converted into one of three cryptocurrencies. The app also offers options to transfer these cryptocurrencies to a wallet of your choice.

Worldopo is advertised as a “world-building simulation” that uses a combination of augmented reality and virtual reality imagery to build your world. It combines this element with blockchain and a technology called ‘Directed Acyclic Graph’ (DAG).

Think of it like Pokémon GO and Ingress: users can view data from Goole and Open Street Maps, which they can use to shop for real streets in real cities around the world. This is where MMORPG games come in: other users can raid buildings, create alliances with other users to mine blockchain, and build their own economy within the app. Bitcoin, Ether, and Worldopo’s native currency, WPT, can be earned within the game.

Troncoso is an ‘evolution’ of the popular Ethereum game, Ethergoo, ported to the Tron network. The game is idle, where the player earns Goo without doing much. To collect more, the game allows you to steal the goo from other players to collect as many as possible. The most active players in the game have the opportunity to win TRX, the in-game currency.

To register for the game, players must have a wallet capable of storing Tron. There are different options that the game offers at the beginning, like TronLink for Chrome users for example. However, every action in the game requires TRX, so you need to have some TRX in your wallet to get started.

This game is an HTML5 game available on Windows and smartphones that use the Ethereum blockchain. The purpose of the game is to collect and train ancient heroes while equipping them with unique items, just like the games that are already available on smartphones today. Create the ultimate team and fight epic battles, all in a quest to conquer the game world.

A MetaMask wallet and some ETH will be needed to start the game. This is because the heroes are traded through the Ethereum network and most of them are sold on the MCH market. You will also have to earn in-game tokens (GUM) in the market to trade heroes. If you want to try it out, there is a trial version available where you can sign up without having an ETH wallet, but you will play with limited capacity. Your purchased heroes are stored on the Ethereum blockchain, where they are safely kept until you need them for battle.

CryptoKitties operates on the same principles in that it allows you to trade and transact on virtual cats. It has been around since 2017, during which it grew in popularity, and it still exists and continues to be a very addictive blockchain game.

The goal of this game is to grow your collection by collecting and breeding cats to sell them on the market. Then other players can buy them, just like you too can buy cats and upgrade your captive breeds. You can also contact other players to collaborate (creating better breed lines through crossbreeding) and sell those kittens for a fair price.

The game is based on the Ethereum blockchain and uses ETH as the in-game currency. This is used to buy CryptoKitties on the market. Players also pay you in ETH if they buy your Kitties.

No decent gamer would say no to a pirate-themed game, and the blockchain gaming scene was quick to jump at the chance to create one. The game is set during the 17th century, a time known as the Age of Piracy.
You control a pirate/privateer and it is your job to make sure your character is well-fed, drunk, and healthy while surviving and completing different tasks and other challenges that the game throws at you. The game creates the need for crypto by having your character be responsible for the “goods” that are in the game. You can sell these products using the in-game crypto, Ludum (LDM).

In addition to buying and selling using Ludum in-game, you can also sell them online. However, there are only two exchanges that are currently listed on LDM.

The EOS Knights mobile game is a game designed to run on the EOS blockchain. The blockchain allows you to complete tasks like “missions”. These range from collecting materials, adopting various pets, and crafting items. You can then exchange these completed tasks for EOS cryptocurrency.

The game was released two years ago and a number of improvements have been made so far including multiplayer functionality and new items and categories in the game. Additional bosses have also been added, making the game much more interesting than it was at launch. Blockchain and Games: The 8 Best Games That Build On This Relationship.

Earning cryptocurrencies is not for everyone. There are those who would love to have it, but just don’t have the excess money to finance the creation of a crypto-mining platform. With the appearance of games in various genres, cryptocurrency has just taken a step to become accessible to everyone who is interested in trading.

Thank you for reading Blockchain and Games: The 8 Best Games That Build On This Relationship.