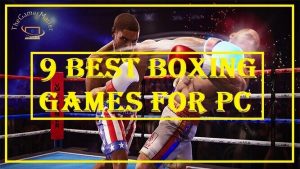 Have you ever wished you could punch someone in the face without any repercussions? After a long day of work or study, we all need to let off steam and I have the perfect solution for you gamers. Boxing! As you punch, punch and Hookshot your opponent, the boxing game provides an escape from reality. Imagine someone you don’t like and take your anger out on him in these amazing boxing games that I am about to introduce.


Although you can buy boxing gloves and beat up your loved ones, that’s not what boxing is about. In fact, with video games, this is conceivable. Also, motion sensors and virtual reality games can be used to teach boxing. I will go straight to a list of the best boxing games ever made for those of you who are eager to play and learn.

These best boxing games for PC are entertaining with a variety of strange characters. It’s more entertaining to watch them directly when you knock them out with your fist. This game offers hours of muscle movement that will tire you out but leave you wanting more, so strap on your Oculus Quest VR headset and get ready for a sweaty war.

To make your opponent suffer for hitting you, memorize their moves and time your dodge correctly. You want to hit each of those crazy characters to see their answers. These funny and weird moments are what keep me coming back for more. Some are serious hunks, while others are flashy in their costumes, and some even tease you with their egotistical moves. As you memorize all of his moves and block his hits, it’s more like fighting a boss than individual characters.

Experience the violent battle and slow-motion replay of the realistic action game. In order for players to feel the force of each blow they land on the opponent’s face, Fight Night Champion heavily emphasizes realistic graphics and facial expressions.

As the player endures having blood painted on their face and running down their chest, you can see the misery in their expression. The game does an excellent job of presenting details such as the location of the blow or the imprint of the gloves. Story mode requires just the right amount of savagery and puffy-faced players. As you and your opponent hide your suffering to appear tough from the outside, it gives the story a more personal touch and a human side.

What results from the gameplay of Street Fighter combined with the voice input of Tekken? This is Big Rumble Boxing: Creed Champions, my friends. It’s a superb form of arcade boxing, complete with flashy hooks, uppercuts, and punches. Although the mechanics seem outdated, every hit you land feels exciting.

The gameplay of the boxing game is more similar to arcade games. Plus, you’re chatting with your favorite Rocky movie star. The game tasks become more complex as you progress, but the controls are easy to learn and use.

The Thrill of the fight

The thrill of the fight ps4 VR boxing games takes a more realistic approach to virtual reality boxing in terms of how it looks and feels. It’s more of a boxing simulation than a game. Every hit feels authentic and the characters push your stamina to the limit. You feel great satisfaction when you successfully deflect blows and counterattack your opponents.

Even if you may get fatigued after two or three rounds if you don’t exercise, your opponent will continue to hit you until you lose. The winner is the one with the most stamina, so don’t worry if you tire easily. The tempo of the game will soon become clear to you.

One of the best boxing game simulations is The Thrill of the Fight, and if you ever wanted to practice but lacked motivation, this game will reignite your enthusiasm. Just keep in mind that it is tough so you need to be ready with your stamina as you will need a lot to get through it and win.

I remember staying up late on my new boxing game 2021 NES gaming system to play Punch-Out. It was easy, and after some testing, I figured out how to hit and dodge. I used to jump for joy when using my lethal ultimate and seeing my opponent fall. Then, in 2009, Nintendo published Punch-Out for the Wii, featuring all the vibrant characters it had been punching out. I was giddy with anticipation because as well as being able to fight my previous opponents I could see them in a lively 3D environment boxing games for ps4.

While I was playing Punch-Out Wii and beating up my old friend from the NES era, all that nostalgia started to come back. It was as if I had reconnected with an old friend who had grown and matured – a welcome gift from Nintendo to all former NES gamers.

The beautiful visuals in the game give you the feeling that you are a boxer fighting for survival in the ring. The only other game you can play on your smartphone is real boxing. This boxing game stands out from other boxing games thanks to the abundance of character customization options.

Real Boxing will allow you to alter the appearance of your characters, from their hairstyles to their shredded body tattoos. Other boxing games may allow you to change your gloves and shorts. 9 Best Boxing Games 2023.

With just three attacks (a jab, hook, and uppercut), the controls are easy, but integrating these three moves into the most challenging fights is what turns a novice into a pro. Although you can dodge left and right using the controls on either side, it takes a bit of getting used to.

Along with other sports, such as baseball, badminton, and golf. Boxing champions are also making waves in Wii sports. It’s as easy as indicating that you’re boxing by waving your nunchaku controller in the air. The ps5 boxing game boils down to little more than simple Boxing VR boxing games. It’s so simple that you can beat your opponent with a couple of hits. When you take on the opponent of another genuine player, the game turns into a competitive boxing game on PC.

Expect neither more nor less because boxing is the main focus of this game. You can customize your character in the most fundamental ways to add a bit of personality. You’ll be climbing into a grove to appreciate in a few hits.

A virtual reality boxing game with an online multiplayer option allows you to challenge players from all over the world to a fight. In this new update of Rocky Legends, you will face recognizable figures like Apollo Creed, Ivan Drago, Rocky Balboa, and Clubber Lang. Put on your virtual reality (VR) headset and get ready for a fierce battle with opponents from all over the world in ps4 boxing games.

Furthermore, The best boxing game combines boxing and action components, giving Creed its distinctive flavor. It provides you with enough visual cues and color combinations to guide you without interfering with the immersion of the game. Creed: Rise to Glory is a game well done; however, it lacks stamina because it doesn’t correspond to the stamina bar in real life. However, if you get the hang of it, it doesn’t ruin the dive.

Round 4 is the latest installment in the Fight Night series, developed by Electronic Arts oculus quest 2 boxing games. The boxing genre was once transformed by fight night, which introduced new and improved mechanics ahead of its time. It’s time for Round 4 to continue the rise of the legacy and ensure player needs are met.

The best boxing games for PC The graphics are realistic when the smooth animation with 60 frames per second and the exciting boxing games for Xbox one. You are controlling them as they fight in the ring while watching a real boxing match.

In Legacy mode, you can advance to higher ranks and go from unknown rookie to ultimate champion. Legacy Mode tracks your performance, including dates and win-loss ratio. Put your face on the character you create using ps4 boxing games in face photo mode. Thanks for reading “9 Best Boxing Games in 2023”.