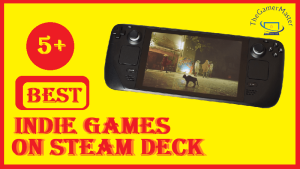 Other Best Info Guides From The Gamer Master

Steam Deck is the latest and cutting-edge handheld gaming device for gamers. Its flexible yet small design can surprise some of the most demanding game titles such as Elden Ring and God of War. However, just because it can handle big AAA titles doesn’t mean they’re the only one you should be playing. A long list of amazing Indie games will surely bring hours of entertainment. In light of this, we’d like to see the top five indie games available on the Steam Deck.

These games span many genres and provide a wide range of options. So there’s something on this list to whet everyone’s gaming appetite. Also, rather than scouring every indie game pick available, you can rely on our list to deliver the best that’s currently available. That includes games that have been validated to be compatible with the Steam Deck. These games are wonderful picks but read on to find the best Indie game on Steam Deck for you.

Hades is the ultimate hack-and-slash game, a rouge-like dungeon crawler, and the best experience of its kind on the Steam Deck. As the Prince of the Underworld, you have the skills and weapons to free yourself from the bonds and confines of the underworld. However, you will receive help from other Olympian gods along the route. However, they will be present in spirit rather than physically by your side. That means you can unlock and use his many abilities for yourself.

That means you can tailor your abilities to those of other gods and tailor the game to your preferences. Hades has over a thousand possible character builds, making the game extremely replayable and providing a new fighting experience every time you play. When it comes to the best Indie games on the Steam Deck, Hades is one you don’t want to miss out on. Whether you like the genre or not, this game is definitely a must-have for any gamer.

A Short Hike, a relaxing adventure game, is one of the highest-rated indie games on Steam Deck. The games cast you as Claire, a young bird who spends her days investigating and unraveling the many secrets of Hawk Peak Provincial Park. The game is a completely open world, with an emphasis on exploration. You can follow defined routes or travel to uncharted terrain to your heart’s delight.

The general objective of the game is to reach the peak of Hawk Peak Provincial Park. However, there is no need to rush because the game is designed for you to experience at your leisure. Also, its melodious music won’t make you feel pressured to move faster than you want. That means you can take your time flying over the cliffs, talking to hikers, and exploring the many wondrous mysteries of Hawk Peak Provincial Park. 5 Best Indie Games on Steam Deck.

Stray is an Indie game, which can surprise you as much as it surprised us. According to Developers and Steam, both are fairly reliable sources. The third-person cat adventure game follows a cat who has been separated from his family and must now discover an old secret to escape from the ruined cyber city. You must save yourself and find a way out by nimbly crawling, jumping, and chasing down paths only a cat can reach.

Without a doubt, Stray tops the list of charming indie games. However, the game is more than just a cat simulator; his story has received high praise since its release, with many calling it a well-rounded product.
So it’s a good thing that the game is thriving in that regard, as players have a strange affection for cats, so the anticipation surrounding the game was higher than expected. It’s even more intriguing to learn that Stray will be Steam Deck certified at launch. So if you’ve ever wondered what the life of a cat is like, give Stray a try and find out.

Simulators seem to be the latest wave of indie games that people are enjoying. You have surely heard of Farming Simulator and Euro Truck Simulator, as well as notable scams like GOAT Simulator. As we have seen with Lawn Mowing Simulator and now with PowerWash Simulator, the genre is expanding into more and more particular niches. As expected, it places a Powerwasher in their hands and mimics the experience of using it to clean various items.

Although the game is a parody, PowerWash Simulator was released on July 14, 2022, and is already one of the highest-rated indie games on Steam. Consequently, it is now one of the best indie games on the Steam Deck. The only reason for this is that players can’t get enough energy to wash the dirt off cars, boats, houses, and other miscellaneous things. So don’t play it before you try it, as PowerWash Simulator is an oddly systematic game that is much more fun when played with others.

Neon White was released on June 16 and is rapidly gaining traction as a new standalone game. The action of the first-person platformer focused on exterminating demons in the sky. You play the role of Neon White, a hand-picked assassin from Hell tasked with destroying these demons and earning a chance to live eternally in Heaven in the process. That’s the point at hand, and the game does it with lightning-fast gameplay and a one-of-a-kind card system.

Soul Cards were introduced to expand the gameplay as Neon White is all about action and fast mobility. These provide new methods to attack your enemies, or you can discard them to gain new mobility abilities. This contains a unique strategy where you creatively shuffle cards to discover shortcuts and new ways to conquer levels. One of the best indie games on the Steam Deck right now, Neon White will certainly introduce you to a different way of experience.

So what do you think? Do you agree with our top five picks? Are there more games from the best indie games on the Steam Deck that we should know about?

Blockchain and Games: The 8 Best Games That Build On This Relationship