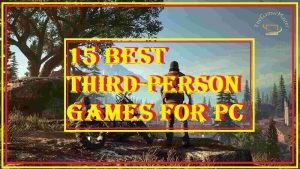 Other Best Info Guides from TheGamerMaster

Heavy Rain is a beautiful third-person interactive drama game about searching for a serial killer named Origami Killer. While managing four protagonists, the game features multiple endings that are decided by your actions (Ethan, Scott, Norman, and Madison).

These endings can range from happy to tragic (what do you expect from a game about a serial killer, a musical number?) In addition, the action includes quick-time events, a dark and scary environment, and genuine individuals. Immerse yourself in Quantic Dream’s award-winning dramatic masterpiece, Heavy Rain, which promises to excite and unwind at every turn.

Mortal Shell is a third-person action-adventure game inspired by Souls (yes!), set in a post-apocalyptic world where the inhabitants are a shell of their former selves.

As a wraith, you control a playable character who can enter the “shells” of dead soldiers. Each fighter shell can be customized to suit a variety of playstyles (knight, rogue, warrior, etc.) and can be upgraded as you progress through the game, one of the best third-person games available.

With its comical yet emotional story, over-the-top characters, and fast-paced combat. The Yakuza series has captured the hearts and minds of fans. Yakuza: Like A Dragon continues the tradition of the series. However, the game moves to a more turn-based RPG approach. The inclusion of Ichiban Kasuga is also a big step forward for Yakuza fans. A new character wants revenge on the one who hurt him and his family.

Yakuza’s unique third-person gaming system allows you to perform various jobs. Battle rogue members of the Tojo Clan (Ichiban’s yakuza family) and reclaim your reputation, each with its own unique bonuses and debuffs.

Warframe is a free-to-play third-person shooter, massively multiplayer online role-playing game set on a futuristic Earth where numerous warring factions vie for control of the Solar System. You play as a Tenno, an ancient race of sleeping warriors who rise from Cryosleep with little memory of the events of their era. One of the best third-person computer games.

Your player character commands mechanical fighting units known as Warframes and leads a four-person squad through missions. Also, narrative modes and regularly scheduled tasks alternate and do not influence the plot.

Risk of Rain 2 is an action-packed third-person shooter that will keep you busy for hours. Its long history, diverse functions, and innovative technique will captivate you. It is a simple action game that does not require much thought. There is a difference between shooting to kill and fighting to win.

One to four people can play Risk of Rain 2. In this game, you and your team must storm an opposing citadel infested with nasty beasts. Unfortunately, you will be overwhelmed by this fast-paced, continuous shooter PC game.

With nearly 100 km2 of huge space stretching from the vast sky to the rocky mountain, Cause 3 is the best third-person action game on PC. The graphics, sound design, and overall gameplay of the game are outstanding. You can take part in all the extreme activities in Just Cause 3, from skydiving to rocket rides.
Also, discover the paradise island of the Mediterranean with total virtual independence. Just Cause 3 has all the qualities that make it one of the best third-person PC games for low-end computers. This game has car stomping, gun shooting, and action-packed gameplay.

Mount and Blade 2: Bannerlord is a third-person strategy game set in medieval times where you command an army. And, most importantly, do what troops do best: fight! It is a unique combination of a third-person single-player action RPG and a complex military strategy game.

You control your character, army, and even the cities you conquer (or plan to conquer). You also play as one of six fictional factions on the mythical continent of Calabria, closely resembling real-world historical empires such as the Romans, Mongols, Celts, and Russians.

Fortnite has been a cultural phenomenon since its release in 2018. With its cartoony visual style and battle royale style of play, it has attracted the attention of politicians, celebrities, and everyday people. Fortnite’s gameplay is unique even within the Battle Royale genre (which it helped popularize). The game’s familiar building and shooting mechanics are included.

Players can defend themselves and confuse enemies by erecting intricate structures and shooting them in the face with fun firearms.

Detroit: Become Human is a thought-provoking drama set in a futuristic universe that explores the boundaries between people and machines. Three androids grapple with their sensitivity and philosophical difficulties as they traverse a society where androids are treated like second-class citizens in the novel, one of the best third-person PC games available.

Additionally, Detroit: Become Human uses the same third-person interactive style as Heavy Rain. With fast-paced action, dialogue choices, and plenty of endings that depend on those choices.

Resident Evil 3: Remake is an example of a remake that hits all the right notes by reinvigorating a much-loved classic horror game. One of the best third-person PC games. Resident Evil 3 is an over-the-shoulder third-person game where you have to acquire and store items. Solve puzzles and chase hungry monsters from your body.
Combat also requires defending against adversaries with various weapons, including guns, knives, grenades, and even rocket launchers! A new 4vs1 multiplayer mode allows you and your friends to hunt down an iconic villain from the series (ie one of your friends), and improved graphics bring a new layer of appeal to the game.

With Dragon Ball Z: Kakarot, return to the ongoing story of one of the world’s most famous indolent fathers. The latest Dragon Ball-themed third-person action RPG. Dragon Ball Z: Best Kakarot follows the canonical story of Dragon Ball Z and takes players through the sagas of the franchise in order.

As some of our favorite Z-Fighters, you battle famous villains like Freiza, Cell, Majin Buu, and others throughout the game. When you’re not fighting, Dragon Ball Z: Kakarot contains RPG elements that allow you to explore the region and engage in activities.

Star Wars Jedi: Fallen Order is the result of combining the characters and lore of Star Wars with a Dark Souls set. This third-person action-adventure game tells the story of a young Jedi Padawan trying to complete his training while he lives, followed by a death squad from the Galactic Empire.

In a post-Hayden Christensen universe, events occur after the fall of the Jedi Order and include Imperial stormtroopers, droids, and Force-wielding enemies and monsters from other worlds. You can also upgrade various aspects of your protagonist, Cal Kestis, such as his powers, lightsaber, and clothing. As you progress through the story, you will be able to make shipments. It is one of the best third-person games.

Nathan Drake’s Farewell Voyage takes us out of the series with a bang, featuring gorgeous set pieces, frantic firefights, and highbrow conversations. One of the best third-person PC games. Nathan Drake is the protagonist of Uncharted 4: A Thief’s End, a third-person action-adventure game. The legendary adventurer is back in search of a long-lost treasure. The game also incorporates stealth, puzzle solving, and hand-to-hand combat.

“This frame must have cost a lot of money!” DedSec’s secondary goal is to rescue Londoners from the private military company Albion, which has turned the city into a surveillance state due to bombing. Thanks for reading the “15 Best Third-Person Games For PC in 2023” article.

Check Also
Close
Featured Posts
Dell vs HP: Which Laptop Brand Is Better And Why In 2023?