Topic:10 Things That Best Sports Games You Must Have 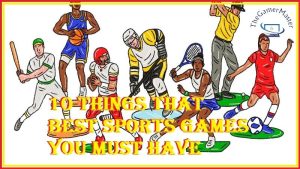 Other Best Info Guides From The Gamer Master

Sports games have been evolving and improving in recent times. We are lucky to play sports games that are close to reality; however, they need to be more realistic to become more popular. Today we will talk about ten important things that all sports games must acquire to look unique in 2023.

Good sports game graphics are a given for any video game, but they are especially crucial for sports games. Since the entire premise of the game is to accurately simulate a sport, the graphics must accurately represent the appearance of an arena or field and how players move and react to commands.

Graphics are the main way gamers can connect with the sport they are trying to “play”; therefore, they must come first in any successful sports game. Most of the sports game franchises like 2K and EA Sports have done an excellent job with graphical enhancements for their games.

Sports games that simulate sports should be playable and relatively simple to learn for most people. It should also feature complex moves that even the most experienced and devoted players can learn. For example, in NBA 2K games, players need to be able to perform basic basketball maneuvers like jumping and blocking, as well as more complicated ones like back passes and crosses. The latter actions, however, cannot be easily carried out by pressing a button.

Similar to how a real basketball player would need to practice harder moves to become proficient, players who wish to employ these more advanced moves need to distinguish themselves with complex gameplay and controls to take their sports games to the next level. This enhances the realism of video games, whose main objective is realism.

This feature is highly sought after in these games because many gamers like to fulfill the dream of being professional gamers. Many sports simulation games today allow you to design a player by selecting their height, weight, body type, facial features, skill level, and equipment.

Precise clothing that can be worn by your created player, such as headbands and sleeves, is one of the more complex adjustments. You can also select the types of plays your player would prefer in the latest NBA Live games, such as “power plays” like dunks and offensive rebounds or “tough plays” like fancy passes and quick floats.

Some sort of customization makes your player, but the ability to customize other aspects of the game makes for a much more unique experience.

More recent 2K games have offered various customization options such as player skill sets, player appearances and equipment, game jerseys (which can be chosen for both teams before a game), additions to the stadium, noise from the crowd, player shadows, and game commentary.

Just playing against the computer can get monotonous after a while. This is why any top-tier sports simulation game should also have a variety of online alternatives that allow players to play and communicate with other players from around the world.

Players can choose from more competitive tournaments where they can try out their custom teams in addition to playing friendly matches. The upcoming FIFA 16 has all these great online features and more! sports games Nintendo switch

Players can skip games they don’t feel like playing in NBA 2K releases or go through full 82-game seasons (via a computer simulation). You can experience the entirety of an NBA season by choosing a club, including player injuries, new player signings, trade rumors, All-Star weekend, and division-qualifying sports games tonight.

Players can create tournaments with different teams or take part in well-known events in other great games, including the latest FIFA sequels!

7. The Choice to Serve as a Manager

The “General Manager” option has been a much-appreciated addition to sports simulation games like NBA 2K16 for gamers more interested in the strategic component of being a member of a professional sports club. Even franchises like FIFA have a specific game for this: FIFA Manager!

As the club’s general manager, you can handle more strategic and political facets of your team’s success, such as signing new players, strengthening your roster through trades, and expanding your stadiums and arenas to drive ticket sales for tonight’s sports games.

A key element that distinguishes good simulations from unrealistic ones is in-game feedback. Even real-life commentators from real games themselves provide gameplay commentary for many of the most popular 2-K titles! This fantastic feature can bring the realism of these games to life for sports lovers.

In-game feedback, ranging from humorous comments to more technical ideas full of jargon, is incredibly meaningful and should not be ignored.

However, the more realistic a simulation is, the more the player can learn from it. The controversy over whether or not sports video games impact real-life gaming is still very much alive today. The player can practice defensive strategies, offensive plays, and general rules of the game, such as technical fouls, 24-second shot timers, and the 8-second rule in NBA Live games, for example.

The adoption of all these minor regulations can make these games more than just enjoyable diversions. Since the player graphics in FIFA 16 were created using motion capture video technology, player moves and kicks alone can teach gamers a lot about Wii sports games.

Sports fans, or fans of a particular professional athlete, want to step into the shoes of their idols and play the games as if they were the star, which is an important factor in the success of sports games. As a result, the best sports simulation games should also look a lot like ps4 sports games played by real-life people.

All the players in the NBA 2K games are based as much as possible on their real-life counterparts, which is one of the key features of the game. The mechanics of shooting, running, and jumping, as well as other characteristics of real basketball players, are replicated in video and sports games for Nintendo Switch.